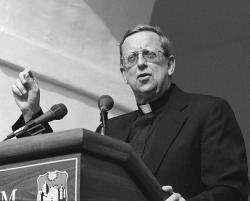 Monsignor Charles A. Kelly was a priest of the Catholic Diocese of Richmond from his ordination in December of 1967 until his death on March 8th, 2001.  Known affectionately to most as "Father Kelly" (Charlie to some, and Buddy to those he grew up with),  he was known as a truly gifted preacher, blessed with the ability to make the "good news" come alive in the words he spoke and the life he lived.  After spending four years in Rome as a seminarian at the North American College, he was ordained at St. Peter's on December 21st, 1967.  Returning to Richmond, he served as Secretary to Bishop John J. Russell and Vice Chancellor of the Diocese of Richmond until 1971.  At the personal request of the late Cardinal Hickey, Father Kelly returned to Rome to serve on the faculty of the North American College in Rome from 1971 to 1979.  He served as Vice Rector from 1974 to 1979, influencing the formation of hundreds of seminarians and developing close relationships in the Eternal City.


In 1979, he was appointed Pastor of Saint Mary's Church in Richmond, VA, where he served until 1985.  At that time, he was appointed Vicar for Priestly Formation for the Diocese of Richmond, charged with mentoring the men studying to be ordained as priests.  In 1987, he was asked to take on additional responsibilities as Catholic Campus Minister at the College of William and Mary in Williamsburg, VA.  He quickly became a true "father figure" to many on campus and his counsel was sought by students, faculty, and administration alike.  It was there that he celebrated his 25th anniversary as a priest, filling the Parish Center at Saint Bede's to capacity with those who had come to treasure his friendship and ministry.


In 1995, Bishop Sullivan asked Father Kelly to assume the role of Rector of the Cathedral.  In the years that followed, he was also charged with serving as the Episcopal Vicar for the Central Virginia Vicariate (1996),  honored with the title of Monsignor (January 1997), and appointed Vicar General of the Diocese (May 1997).  As Rector of the Cathedral, he continued his life-long ministry to students, working closely with the nearby Virginia Commonwealth University.


In August of 2000, Father Kelly was diagnosed with cancer.  Throughout his treatment and his ultimate decision to focus on comfort care measures, his authentic and oftentimes heart-wrenching moments with us were the capstone of a life led devoted to loving God and serving God's children.  He died, much too soon, on March 8th, 2001.


Father Kelly kept many of the notes from his sermons and other speaking engagements.  While written words alone cannot capture the pastoral heart and sheer brilliance of Father Kelly, this website does offer those who loved him the opportunity to share in his thoughts once again and to continue to learn from he who taught all of us so much about the love of our Heavenly Father.  We are particularly indebted to those who have shared with us the few recordings of his sermons that do exist.  As this website grows, we hope that you will be able to share your memories of Father Kelly, as we seek to honor and celebrate his life and the innumerable ways he touched so many of us.